A 70-Year-Old Vision Becomes a Reality 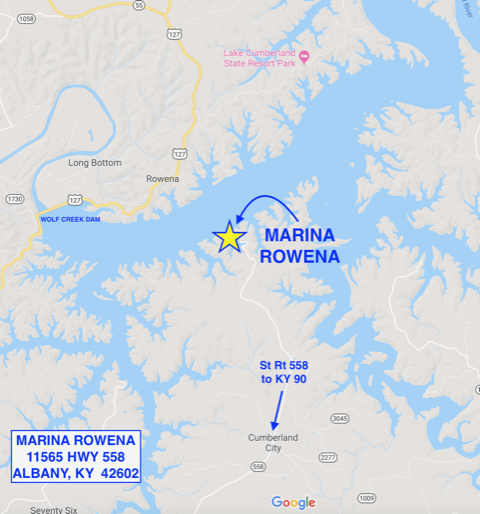 In 1949, the U. S. Army Corps of Engineers called the Rowena Landing South Area a “Strategic Site” for a future recreation development. Sixty eight years later, Marina @ Rowena is becoming a reality.

The master plan for Lake Cumberland, drafted a few years before Wolf Creek Dam was completed, envisioned a large recreation area in the location where Tony Sloan and Tom Allen are currently constructing a marina with future plans to provide short-term and long-term RV Sites, lodging, walking trails and other recreational development.

Although some say that the government moves slowly, Sloan and Allen credits the early government planners for having great insight in what the future may bring on Lake Cumberland. Marina @ Rowena will fill a void where commercial services do not exist for recreational boaters for over a 20-mile stretch of the most heavily utilized boating area on Lake Cumberland. Marina @ Rowena is located 4 miles upstream of Wolf Creek Dam and Halcomb’s Landing which has the largest parking area and launching facilities on the entire lake.

The U. S. Army Corps of Engineers Nashville District studied and reviewed the proposed marina project at the Rowena Landing South Area from 2007 to 2017 when the project was approved on July 5, 2017. This ten-year process was very difficult, acknowledges Allen but he gives the Nashville District great credit for recognizing that a need does exist and the timing is right for a new marina development on Lake Cumberland, as it has been over 50 years since the last marina lease was awarded on Lake Cumberland. Although Recreational Boating has taken a back seat to the Army Corps’ many priorities, Allen credits the Nashville District for recognizing the importance of the marina industry and being the largest Army Corps District in terms of number of visitors to their 10 projects throughout Kentucky and Tennessee.

In over 60 years that Tony Sloan has been involved in the marina industry on Lake Cumberland and Dale Hollow Lake, he says he has seen this country’s population grow and boat ownership grow exponentially, creating the need for a new marina development.

“The lack of parking on the steep shoreline of Lake Cumberland creates an inconvenience for boaters and much congestion concentrated around the existing marinas,” Sloan pointed out.

Marina @ Rowena is currently completing multiple parking areas in order to provide convenient parking for their customers when the marina harbor is finished.

Allen said the development will be in phases with infrastructure (parking and utilities) as the first priority; a main dock and over 125 boat slips will be the second priority; and then after that, the development will continue for several years with the RV Sites, lodging, trails and other services and facilities that is in demand by the recreating public will be completed.