Rowena is Designated a Clean Marina 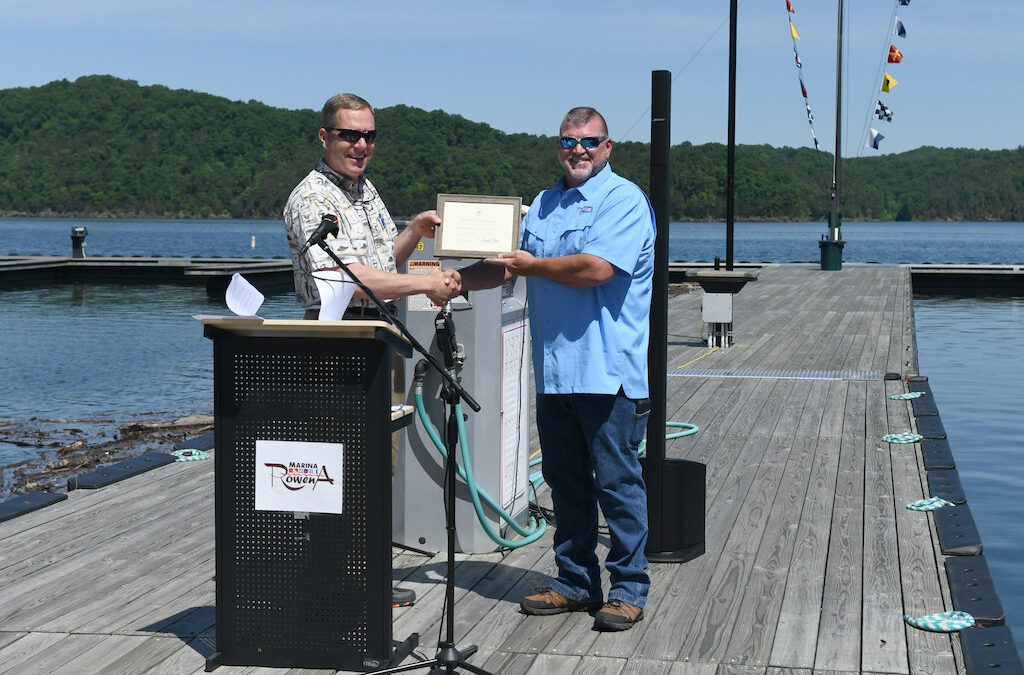 Dyson said, preparation for the Clean Marina Program was not a fast track or an overnight occurrence. There was an extensive checklist that required completion.

There are seven sections of the Clean Marina Program checklist. Each of those sections require a seventy-five percent score or higher.

“We were very fortunate to have a great team of people that were able to check all the boxes,” said Dyson. “We truly appreciate that opportunity.”

The Clean Marina Award is part of The Cumberland River Basin Clean Marina Program, a voluntary program offered by the U.S. Army Corps of Engineers Nashville District, and its watershed partners, to promote environmentally responsible marina and boating practices.

“It’s not just the recognition, this isn’t an end game, or the culmination of a big effort. Rather, it’s the beginning of a commitment to maintaining this as a Clean Marina,” said Dyson.

Maintaining a clean marina is not only good for the environment and the local wildlife. It also gives the community a safe place to recreate and enjoy their time in nature.

“The staff here at the marina make this partnership with the Corps a huge success by going the extra mile, reaching the community and encourage the maintenance of a clean and safe basin that can be enjoyed for decades to come,” said Lt. Col. Joseph Sahl, Nashville District commander.

Tony Sloan, one of the Marina@Rowena owners, said the Clean Marina Award is an honor, and serving the local community is one of the best parts of the job.

“Seeing people out here, recreating on our lakes, spending time with their families, knowing they’re in a safe and clean marina, brings me and my staff a deep sense of accomplishment because there wasn’t much here at this location before we got started and we’ve worked hard to get to where we are,” said Sloan.

Location for Marina@Rowena first began planning back in 2007, when Lake Cumberland was first lowered for the remediation work on Wolf Creek Dam.

It took approximately 10 years of planning and lobbying. In 2017, company owners Tony Sloan and Tom Allen signed the lease for the marina, through the Army Corps of Engineers.

Former Mayor of Albany John “Nicky” Smith said he is proud to see how far the marina has come, and the Clean Marina Award is well deserved.

“I was involved in the water system and relocation of water from out in Albany, through Clinton County into Russell County, which brings clean drinking water to Marina@Rowena,” said Smith, “So, I’ve seen this place grow from nothing, into this beautiful slice of heaven and it feels great to still be a part of celebrating the continued success.”

The Cumberland River Basin Clean Marina Program was established in support of the National Clean Boating Campaign which encourages marina operators to protect the very resource that provides them with their livelihood: Clean Water.